The Dorper balance can be represented by a wagon wheel, where each spike of the wheel represents one important trait of the Dorper.

To understand the correct direction of Dorper breeding, you have to start at the original goal of the Dorper.

During the 1930’s there was a big over production of slaughter lambs in South Africa. Because of the low rainfall of most of the South African sheep areas, fat tail types and indigenous sheep breeds were mostly used because they were hardy and adaptable and were able to produce in the harsh environment. Because of these breeds’ poor carcass quality, lamb carcasses couldn’t be exported to Europe and the UK. The big European and British meat breeds had beautiful carcasses, but could not adapt to the hard conditions.

Therefore there was urgency for a new breed which had some of the fat tail sheep’s hardiness and adaptability and some of the European and British meat breeds’ carcass quality. After a lot of cross breeding projects between these two extremes, the Dorper was bred out of the Dorset Horn and the Black Head Persian. From the start the breeding goal of the Dorper was to keep a balance between the two extremes. This balance made the Dorper totally unique and therefore became very popular and the fastest growing breed in the world. 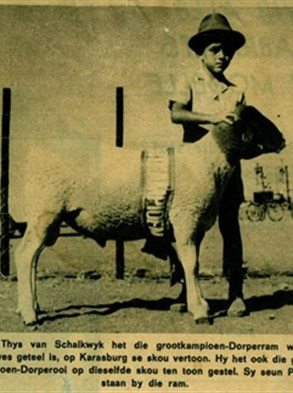 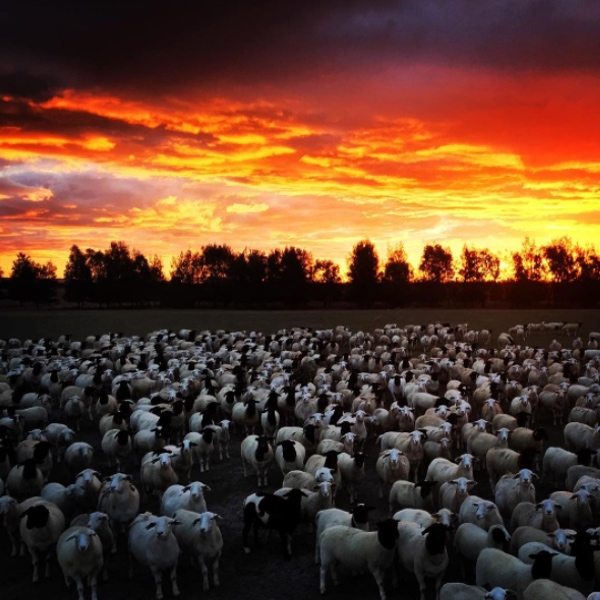 There was no performance testing program for this new breed during those days.

The “Dorper Fathers” saw this balance in a certain visual balance. That balance is well understood and selected for by myself and Floors. At Bellevue we are breeding for that perfect balance, between all the traits which make it such a successful breed. We also use Lambplan and Dorper 21 figures to make this well balanced Dorper even better. The Dorper is not a terminal breed but a maternal breed. Therefore growth, adult size and eye muscle depth is important, but not the only attributes to consider. (That was the main breeding goal amongst the Big British breeds that was tried in the 1930’s). The reproductive ability, fertility, mothering abilities and functionality of the breed is also very important. In fact first priority is to get enough lambs on the ground and well raised, Second priority is to have these lambs carry good muscle and grow fast. (Dorper 21 basically records the kg’s weaned by a ewe per annum. Therefore it gives results on the ewe’s performance and a sire’s daughters’ performance. It also gives normal growth results on males and therefore can identify better terminal bloodlines and better maternal bloodlines.)

One of the most important things about the Dorper is functionality.

It has to be able to walk long distances, even in loose Kalahari Desert sand, with the least possible energy. It has to breed, feed and grow easily without having structural problems to hold it back. The Dorper balance can be represented by a wagon wheel, where each spike of the wheel represents one important trait of the Dorper. When we put too much emphasis on one spike and make it longer, without making the others longer too, the wheel can’t roll anymore and misses its goal. We do not have a negative approach towards this balance. In other words we are not blocking the different traits to prevent them from becoming too big or strong. We have a positive approach, which means we are always trying to make all the dimensions of this balance bigger. 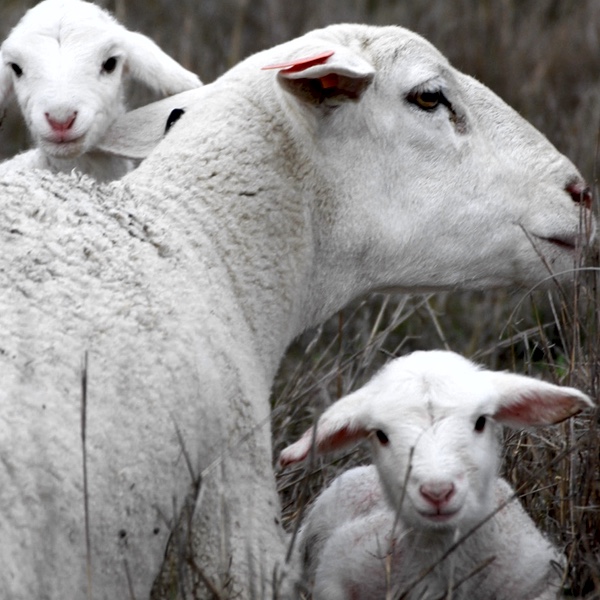 Therefore we are using Australian Lambplan, South African Dorper 21, and the very important visual Dorper balance, to breed the best long-term Dorpers in the world.

Another very important trait of the Dorper is early maturing.

Early maturing lambs are ready for the market at an earlier age and have bigger muscle cuts at an earlier age. However, they do not have the highest adult weight, because they reach maturity earlier in their life and stop growing. Early maturing can be measured by performance testing, but can visually be seen in a certain type. Early maturing sheep do not carry all their weight in height and length, but as much in width and depth. Because of early maturing, the Dorper removes the feedlot from the value chain. Sheep which are too much of the early maturing type are wrong too, because they become dwarfs and too small. (Most of the time too short in the forearm). Again the perfect balanced sheep is the ideal. Another very important trait is motherhood, which includes fertility, easy lambing, enough and good milk, the love of the ewe for the lamb, protection of the lamb by the ewe against harsh temperatures and bad conditions, as well as predators and other dangers. The ability of the ewe to let a lot of the energy of her feeding, flow through to the lamb, at the cost of the ewe’s condition. We believe all of this is represented by femininity. 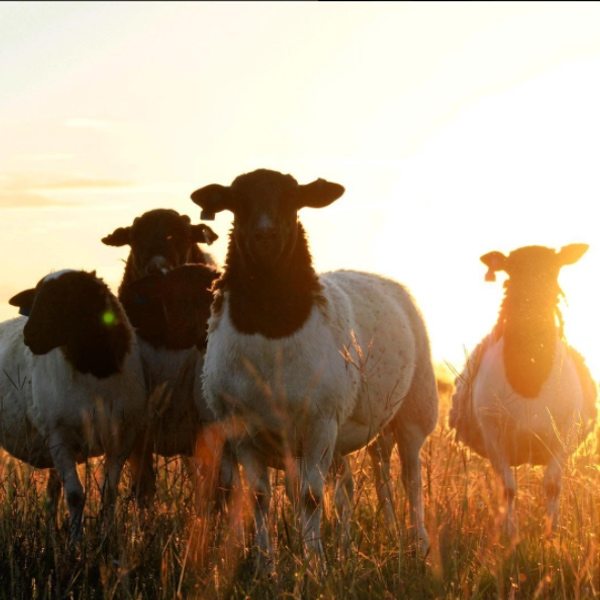 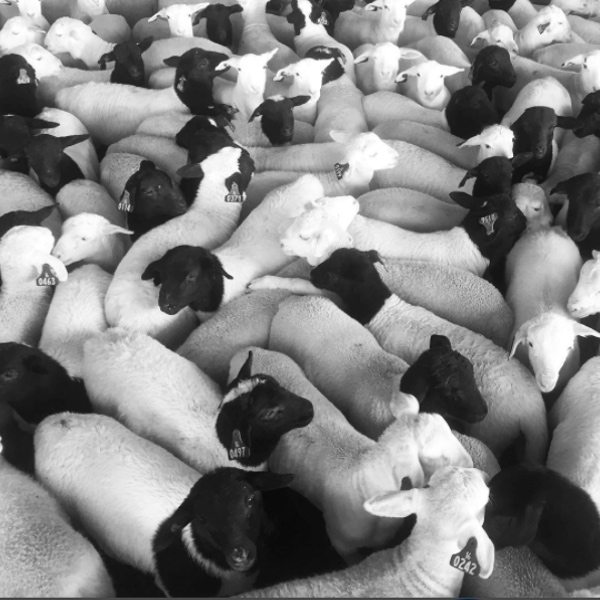 We can describe femininity in Dorpers in a nutshell

- First by a three dimensional wedge towards the front. To explain, if you look at the ewe from the side, the underline should cut up from the back to the front. Therefore it should be shallower in the front than the back. When we look at a ewe from above, it should be wider at the back than the front.
- A longer thinner neck.
- A finer bone structure with
- Feminine lines in the face, but still with a long strong head, square mouth and Roman nose.
- Masculinity amongst the rams is very important too. The feminine ewes breed masculine rams and masculine rams breed feminine ewes.